Am I the only one who noticed that the BBB, the Better Business Bureau, has just made a dramatic shift in online policy?
Previously, the BBB has a BBBOnline logo that looked good and helped us look credible.

I recently got a call from the BBB that they were obsoleting the old logo and I had to switch to a new one.  Oddly, although it's an important trademark and logo, it comes with no guidance on its usage such as whether  we can change the size or color to make it work better on the page.
More interesting, I just clicked on it and it turns out that there is an entire review program built into the system. A sort of Angie's-list-or-Ebay-rating&review-the-site program with all sorts of opportunities for competitors to do damage and for people on my side to generate positive reviews.  So they are a late-comer to the user-generated content party.

Is this well done? Anybody have experience with it? Do they have any idea what they're doing? I  wasn't told anything about this new review system that I was putting a link up to from my website by them but in terms of truth in advertising, it's a pathetic effort. I've noticed that the BBB has cycled through several online programs in the five years that I've been in business. They had a kid safe program and logo and a privacy seal and logo both of which were obsoleted two years ago. When I joined, I had to first join a local group which cost a few hundred dollars just so I could then join the online group which cost another few hundred dollars. Now, that program is being obsoleted for this new one called Trustlink.

The BBB  told me it was a different logo, they didn't say that it was a different program with reviews that anyone could post which were now linked to from my site!  I'd like to see them off the web since they just don't seem to have any idea how to behave or what to do.
Anyone know a good alternative for online use with decent credibility?Maybe I'll drop them.

I'm following up on my previous post about my online identity by tracking my experience with Windows Live.  As background, everytime I have booted my computer for the last few years, the Windows Messenger software has asked to get updated. Until this past week, I've always said no.  And in my office computer, everytime I start a Microsoft Windows application, it asks me to participate in Windows Live. In neither case did I have any idea what would happen if I said yes. 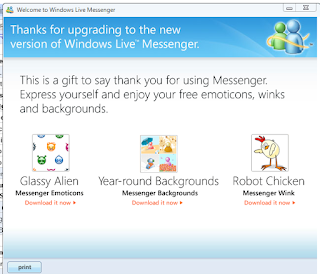 This past week, I accepted the Messenger update which was a long update. Near the end, I unchecked a bunch of boxes so that my search engine (Google) would stay the same, my home page would stay the same, and that my computer would not be tracked to help Microsoft for their debugging or marketing.  I note that the choices were clear and visible in plain English so no complaints there. There was one pop-up which I dislike both from websites and software installation. This one asked me if I would install some of their software on my computer "as a thank-you."  Being very suspicious of such things, I declined.
Posted by BBat50 at 7:05 AM No comments:

Urchin vs Googl Analytics: Score One for the Old School

Urchin was bought by Google a number of years ago and their software was upgraded and repurposed to Analytics which we all use.  But many of our hosting companies still provide for free the old Urchin software. Recently, when I wanted to track the PDF downloads from my site, I found that Analytics somehow doesn't have this feature (or I just couldn't find it) so I fired up old Urchin and found how many people had downloaded my handy-dandy ebook, Learning about Homeschooling.  It's free, take a gander.

Feng Shui can guide designers, architects, builders, and planners towards a harmony that provides health, peace, and prosperity for the residents and visitors.  It is increasingly popular in modern American culture.  Great strides are being made to understand the balance with nature and what can be done to protect it or recreate it within our structures.

There is also an art of Feng Shui for designing websites. I have dwelved in the ancient mysteries and science and commissioned some new translations so that I can work with the most traditional principles of the art.  Soon, I will reveal and publish:

I cannot at this time announce my collaborators but I have had some very significant luck in finding authoritative collaborators.  Soon, the net will know a new harmony.
Posted by BBat50 at 2:56 PM No comments: