Is it just my imagination or is the advertisement pink box around the advertisements on the top of Google getting increasingly faint so that now, it's almost impossible to discern?  Additionally, didn't they use to limit it to two results? 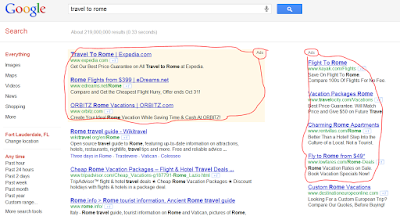 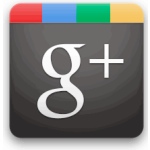 Compete.com says "Compete's data comes from a statistically representative cross-section of 2 million consumers across the United States."  They elaborate on how their data differs from log data but in all of this, I think they side step a really big point.  In the case of my site (SpellingCity.com), the reason that they differ from my logs is that most of my traffic comes everyday not from home computers but from computers inside K12 institution. ie  Schools.  In short, there are three big sectors of our economy:
In the old days,  all the computers were in business, government, and educational institutions.  Today, however, consumers also have computers at home.  But many of these same people leave their homes during the day and go to jobs where usually, they have another computer. These same people do a lot of their shopping and see a lot of ads while they are at work.  Schools in particular, have a very large number of computers which get used in many cases over 50% of the time since they are often on carts going from class to class or in a media center with classes filing in and out.
I know that in my case, the reason that Compete's numbers are misleading, the reason that they report less than half of hte full traffic for SpellingCity is that they don't measure the traffic from schools. Should they? I do not know.  Should they admit and highlight the fact they are no reporting this data? Absolutely.  This table is misleading and misses the biggest reason that at least in my case, local logs don't match what they report.
Posted by BBat50 at 3:21 AM No comments:

Googles kills off its losers


A fall sweep (copied from the googleblog.blogspot.com)

We aspire to build great products that really change people’s lives, products they use two or three times a day. To succeed you need real focus and thought—thought about what you work on and, just as important, what you don’t work on. It’s why we recently decided to shut down some products, and turn others into features of existing products.

Here’s the latest update on what’s happening:
In addition, later today the Google Labs site will shut down, and as previously announced, Boutiques.com and the former Like.com websites will be replaced by Google Product Search.

Changing the world takes focus on the future, and honesty about the past. We learned a lot from products like Buzz, and are putting that learning to work every day in our vision for products like Google+. Our users expect great things from us; today’s announcements let us focus even more on giving them something truly awesome.
Posted by BBat50 at 12:36 PM No comments:

SEO Periodic Table of the Elements

I thought this was silly. Actually hysterical. Its the SearchEngine Land's Periodic Table of the SEO Elements. Speaking of ridiculous inside jokes....
http://searchengineland.com/seotable/download-periodic-table-of-seo

..."the new premium option is targeted at enterprise clients and the messaging is that there will not be any change to the regular Google Analytics as it stands today and that the Premium version offers advanced features and phone call technical support....This is strictly aimed at companies like Webtrends, Coremetrics, and Omniture to offer the kind of support and guarantees that are necessary for some large enterprises to adopt Google analytics....This could be a way to force existing large volume users to adopt the premium version. When the problem occurred a few months ago, it was because of a switch to “Fast Access Mode” which meant that Google Analytics was taking a sampling of your real data to build reports rather than usual all of the actuals. If they roll this out as default on the non-paid version, there may be a need to switch to the paid version to get consistent reporting.

The cost of Google Analytics Premium is in the $150,000 range which makes it very competitive with the other web analytics software providers.
Here's Google's Announcement.
Posted by BBat50 at 5:46 PM No comments:

Does anyone have experience with Paypal reserves and getting them removed from your paypal account?  I just realized that on one of my paypal merchant accounts (I have two), they are withholding 20% of my money for 90 days!!!!!

Let me start by saying that I'm generally thrilled with Paypal as my merchant account vendor. With a total expense rate of 2.7% and a high level of reliability, they are better than the other vendors that I use to process credit cards.  I give them high marks for low cost, high reliability, great technology, and great service.

I've previously had one big frustration with them in that their reporting sucks.  I have several product lines being sold (I'm in the hundreds of thousands of dollars of revenues in a year with the average payment way under $100) and Paypal isn't really able to help us track by product line.  Even when we have the payments come in under different emails, they can't sort them out. It turns out the solution is to open a child account. The process was cumbersome, basically, open a new account, get it approved, get it linked to the old one, drop out all the fees, and the child account can ONLY withdraw money up to the parent account. And it's an automatic process which happens nightly.  Which would be fine except we have some refunds (we do a money-back offer) and about 4% of our customers take the refund.  Paypal does an automatic withdrawal every night but on the days that there are refunds, they try to withdraw too much and it produces all sorts of emergency warnings and failure notes.

Second big problem I just released. My account has reserves. In fact, they hold onto 20% of my funds for 90 days on a rolling basis.


Paypal's rules say this but they don't seem to apply to my case:

[I]Reserves are funds that belong to you but have been set aside. We hold money in reserve just in case you receive payment reversals or chargebacks and your PayPal balance isn't enough to cover them. Reserves are typically applied to merchants who handle:
·         large sums of money,
·         high dollar items, or
·         items in high-risk categories[/I]
Posted by BBat50 at 7:09 AM No comments: